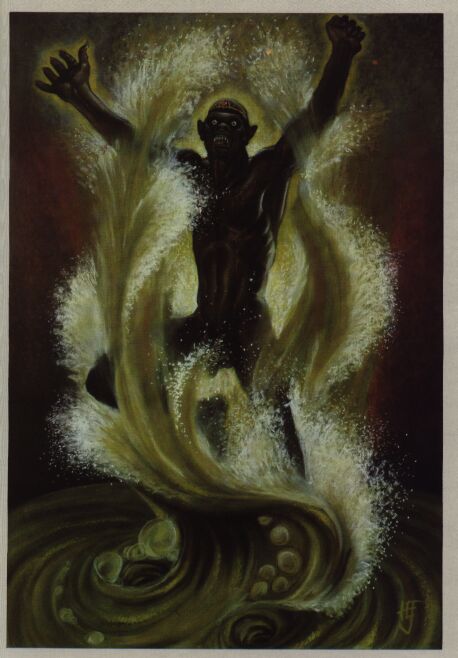 “However, he gave little heed to the wall at the time. His attention was centered on the band of beings that squatted about a dark green pool in the midst of the court. These creatures were black and naked, made like men, but the least of them, standing upright, would have towered head and shoulders above the tall pirate. They were rangy rather than massive, but were finely formed, with no suggestion of deformity or abnomality, save as their great height was abnormal. But even at that distance Conan sensed the basic diabolism of their features.
Robert E. Howard, The Pool of the Black Ones

Humanoid monstrosities, the Black Ones appear as mockeries of the human form. Gaunt, towering, and with ebony skin, these creatures inhabit ancient ruins where they conduct rituals upon human captives, turning them into small statues of what appear to be polished bone. The Black Ones keep these statues for some unknown purpose, perhaps as part of the requirements for spells or rituals, or for some religious reason. They seem to be totally silent, perhaps communicating through some form of telepathy or even facial expressions among their kind. 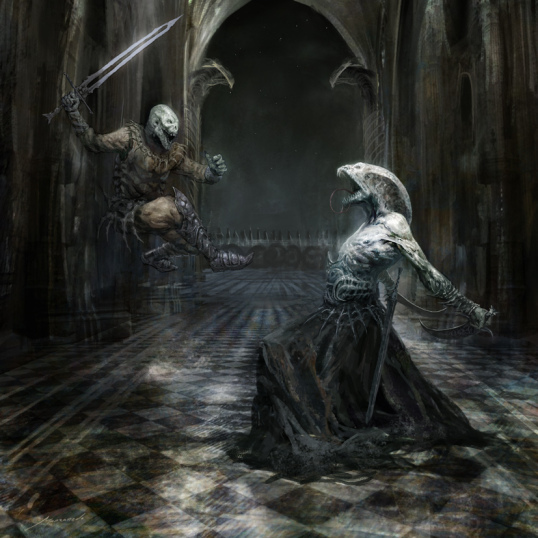 The seat of the First Empire of the serpent people, during the Paleozoic era, was Valusia. The Serpent People originally ruled over humans in Valusia but were defeated and almost wiped out in humanity’s battle for survival against the “elder things” that predated them. Over time, humans dominated Valusia and the Serpent People became a legend. The Serpent People, one of the few surviving “elder things”, infiltrated human society and ruled from behind the scenes for a time but were again discovered, defeated and cast out in a secret war.

After the destruction of Valusia, the Serpent People escaped to Yoth, a cavern beneath K’n-yan. Explorers from K’n-yan visited Yoth frequently to learn more of the Serpent People’s scientific lore. Their next downfall came when they brought idols of Tsathoggua from N’kai and abandoned their patron deity Yig to worship their new god. As retribution Yig placed his curse upon them, forcing his few remaining worshipers to flee to caverns beneath Mount Voormithadreth. 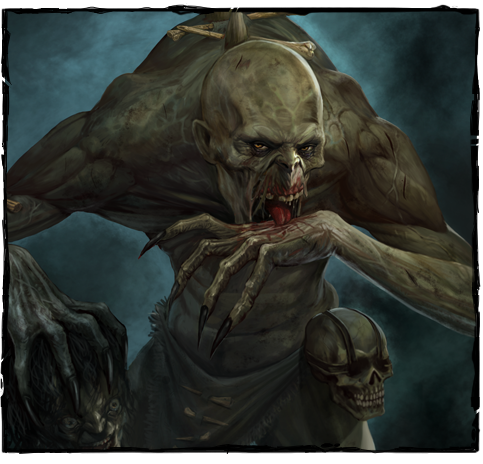 Ghouls are a species of cannibalistic nocturnal creature. They are usually described as white or green-skinned humanoid hairless creatures with long canine muzzles, pointed ears, and clawed feet that have almost become hooves. They inhabit networks of underground tunnels and crypts, and eat the corpses of dead humans. Despite their favored food and reclusive habits, Ghouls are usually not hostile creatures and sorcerers have been known to befriend and even travel with them. Ghouls communicate using a “meeping” or gibbering vocalization called Ghoul Speech or Pnathic.

Ghouls are found through the underworld or network between worlds as well, and it seems that they can navigate between the waking world and dreams through the use of special tunnels. The universal center of ghoul activity seems to be the bone-filled Vale of Pnath, were the world’s ghouls dump cleaned bones. This dumping is done from the “Crag of the Ghouls”, a cliff jutting off from the mountains of Thok over the vale.

Ghouls are known to worship the Great Old One Mordiggian, and his priests wear concealing hooded purple robes and metal skull-shaped masks, which double as disguises when the ghouls wish to walk among humans. Ghouls appear to be a separate species from humans, breeding and living as their own society, but it also seems that some humans can slowly become ghouls, though the exact means are unknown. 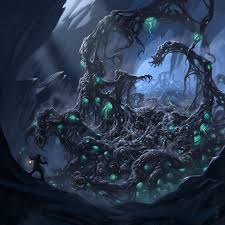 A shoggoth is an amorphous, sentient blob of self-shaping gelatinous flesh, something like a giant amoeba. A shoggoth at least fifteen feet in diameter if it shaped itself into a sphere, but larger and smaller versions exist. A shoggoth is capable of shaping itself into whatever organs or shapes it finds needful at the moment—it’s usually sporting a profusion of eyes, mouths, and tentacles. They’re tremendously strong, and they travel on land and water equally swiftly. They can usually be heard saying “Tekeli-li” over and over again. It is believed one lives under the castle in the city of Arunjun.

Ascendant campaigns can view previous versions of their pages, see what has changed (and who did it), and even restore old versions. It's like having a rewind button for your campaign.

We've already been saving your edits, so if you upgrade now you will have instant access to your previous versions. Plus, you have our no risk refund guarantee , so there's nothing to lose.

I'm sorry, but we no longer support this web browser. Please upgrade your browser or install Chrome or Firefox to enjoy the full functionality of this site.